Most Flash programmers tend to regard Flex programmers in the same way that Web Developers regard .NET programmers. Flex (and .NET) programmers tend to be generalists who don't really know that much about interface programming and are afraid to get into the guts of a system. Flex itself is a 300k beast which may speed up your development, but it will slow down your application.

However you are in luck. With Flash CS3 Development, the only really hard part is knowing where to start. Once you are over the initial hurdle, you will find yourself in code most of the time.

First of all, open Flash CS3 and create a new project (File -> New... -> Flash File (ActionScript 3.0).
If you open the Properties Window you will see a box labelled Document Class. This is where you will put the Main ActionScript file which will control the application.

For now what you should do is save your .fla file and create an AS file in the same directory (say Main.as). In the Document Class you enter class name "Main".

Put the following code in Main.as

When you compile this (Control -> Test Movie) this will open up an Output window printing out the trace statement ("I am in the main app").

While this is fine for your own project file, what do you do when you want to import 3rd party libraries or else write large multi file applications?

Understanding packages is important for the next step. A package name is basically a signature which reflects the organization of a file within folders. Therefore a package called com.adobe.webapis.flickr represents a path com/adobe/webapis/flickr and any files to do with this project are put in this folder.

This means Main in this case should be placed in the subfolder com/yourcompany/project and referred to in the Document class as com.yourcompany.project.Main.

You may want to move this folder to another location however (or else use a shared package vs copying it into your project, especially for common files). To do this, click on the Publish: Settings... in the Properties window which will bring up the following dialog. 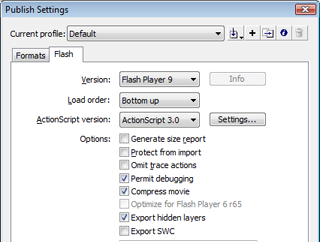 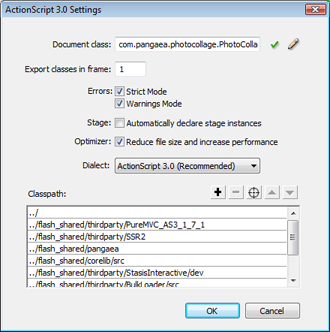 And there you have it. A means of adding ActionScript to the Flash file and a means of splitting up your project into multiple files. When you want to call in your own custom classes, you import them according to their class name (the same as when you imported flash.display.MovieClip) i.e.

Just remember to add it to the class path!

seo reseller said…
I really admire web developer, programmer and web designers. They really have a vast knowledge about these things. I am a blogger, but I don't have the talent to learn all of these things. Anyway, thanks for sharing this tutorial. I will be reading the 2nd part.
10:17 PM

Popular posts from this blog

October 24, 2008
What is a gem and why would you want to freeze it? In Ruby, there are times when you want to access pieces of functionality that other people of written (3rd party libraries) and you normally have 2 options. You can install a plug in or install a gem. Normally the method you use is determined by which ever is made available by the author. Gems are installed on the host machine and are pretty handy when you want to run things in the command line or else across lots of projects, but their downside is that if you use a gem in a Rails project there is no automatic publishing mechanism when you deploy your site. You will need to log onto the remote host machine and install the gem manually. Plugins are specific to Rails and are similar to gems in that they are also 3rd party libraries. However they are associated with your Rails project as opposed to your machine so they will get posted to the server on a regular deploy. Freezing a gem is the process of transforming a gem into a plug in
28 comments
Read more

April 20, 2011
I wanted to go over Responsive Web Design using CSS. In the old days of web development, we had to code to common screen sizes (i.e. 800 X 600, 1024 X 768) and we patiently waited for people to upgrade their computers to have a decent amount of screen real estate so we could design things the way we really wanted. We also took on semi stretchy web layouts etc to expand and contract appropriately. Then about 2 or 3 years ago, Apple released this little device called an iPhone with a 320 X 480 resolution which took the world by storm and suddenly a lot of people were viewing your website on a tiny screen again... Anyways, as it can be difficult to design a site which looks good on 320 X 480 AND 1680 X 1050, we need to come up with some kind of solution. One way is to sniff the client and then use an appropriate stylesheet, but then you are mixing CSS with either JavaScript or server side programming and also potentially maintaining a list of appropriate clients and stylesheets. Also,
14 comments
Read more

July 31, 2008
One of my current projects is using RubyAMF to communicate with Flash (http://rubyforge.org/projects/rubyamf/). On the whole this is really nice because it allows you to transfer Ruby objects directly to ActionScript ones (as opposed to translating the object into XML, sending the XML and then recreating the object in ActionScript). However, Rails does not provide a built in transport mechanism for AMF, so we cannot run functional testing directly on the data call (as we could for an XML or HTML transport layer). This is a show stopper for a lot of people (Rails w/o Unit testing = a big mess of trouble when something goes wrong). We can though serve both the HTML and the AMF formats depending on the request format. This means that we can test the object instantiation logic and make sure there are no errors in the controllers (though we cannot check the actual format of the data being served). In the controller, instead of rendering AMF alone, do the following respond_to do |format|
22 comments
Read more